No launch is perfect, but Microsoft's rollout of the Xbox One two weeks ago was buggier than usual. There were apparently a lot of systems shipping with defective optical disc drives. I should know. I got one.

The story didn't end there. The day after the launch, when I tried to get a hold of tech support to get my console replaced I was treated to three support options.


The Xbox ambassador was my first option, and I was given an enthusiastic Xbox specialist, but these ambassadors are really just folks from the Xbox community that can help solve simple problems. My busted Xbox One drive -- and if you didn't check out the video it basically makes a cranking sound as the disc won't go all the way in -- was not something that he could handle.

The ambassador did tell me that my problem would likely require speaking to a person, so I jumped into that queue. 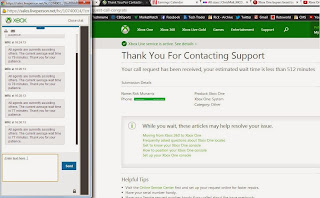 Several hours later I figured I would give the text chat a try as I waited for my service call. The rep was kind and helpful, but ultimately admitted that she couldn't complete my service request since a live phone call was required so I could provide my credit card authorization for the replacement. Microsoft did the right thing by offering those with defective hardware an advance exchange where it places a $500 hold on your credit card as it ships a replacement system. The recipient then has two weeks to return to original one.

As this text chat was happening I got the call from tech support. The person calling told me that he would have to transfer me to the hardware replacement department. Sure. Did I have a choice?

As that transfer began taking a long time -- after already having waited hours for the call -- my text chat rep received authorization to call me and get my credit card information. I was suspicious, but the phone-based tech support was leaving me out to dry. I accepted her offer and completed the advance exchange. As for the phone transfer to hardware on tech support, I hung up after 42 minutes.

I was told, and an email confirmed, that I would be receiving the replacement soon. It would ship in two business days, and take three to five days total to arrive. That was fair enough, but a week later I had not received the Xbox One replacement or a shipping confirmation.

I called on Monday, nine days after the initial request. It had not shipped. They were backed up, but I would receive an update within five days. What the what? Sensing my frustration she asked if I wanted to speak to her supervisor. I'm not that guy, but I was hungry for answers. Why was Microsoft telling the public that it was only a small number of defective Xbox One systems shipping out, yet they were so behind on answering service requests and processing replacements?

The supervisor wasn't any more helpful. He informed me that he had received a few calls earlier with similar delays, and that they were all made on Nov. 23 (the day after the launch). He informed me that Microsoft did give folks with defective consoles a free digital game, but I reminded him that this was done on Nov. 24, before the two days wait became more than a week. He said he would call me the next day with an update. That was better than five days, naturally. I thanked him. I never got the call the next day.

On Wednesday I decided to call again. This was now 11 days after I reported my problem and was promised a replacement shipping in two business days. I was told that it was about to ship. I was skeptical, but left it at that. It was true. It shipped Wednesday night. I received it late Friday afternoon, 13 days after my service request.

The replacement console seems to work, but the process has sapped my enthusiasm.