The Day Jeff Bezos Made My Day 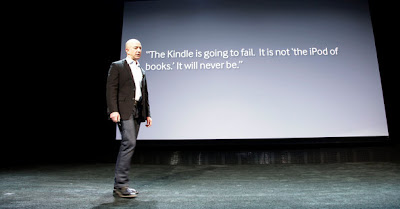 As a financial journalist -- a tech tracker at that -- it's flattering to know that the tastemakers are reading your stuff. It shows that you're not just stringing words together for your own amusement.

Well, in late 2011, Amazon.com (Nasdaq: AMZN) CEO Jeff Bezos read something that I had written a few years earlier. He didn't just read it to himself. He belted out a quote of mine before a live-streamed press conference attended by the country's most prolific tech writers and bloggers.

"The Kindle is here, but it may as well be kindling," he read, as my very words blasted in a projection behind him.

The Kindle is here! It may as well be kindling!

Wait. What? Bezos had singled out five negative passages written when the original Kindle e-reader was introduced in the fall of 2007. I made the cut, in a Fool.com article where I called the device a $400 paperweight.

Bezos was kind enough to leave the authorship attributions out of the five scathing Kindle articles, but The New York Times' David Streitfeld contacted me for an article he wrote shortly after the press conference that introduced the Kindle Fire tablet and even cheaper Kindle e-readers. He uncovered all five writers.

I wouldn't have minded if Bezos had actually divulged my name at the time. It would have still been an honor. I also still stand behind a lot I wrote in that original 2007 piece.

"Priced too high. Out too late."

That's what follows the opening quote that Bezos singled out, and isn't that what happened? The Kindle didn't start to gain traction until several price cuts -- and years -- passed. It was overpriced at $400, and the fact that it's selling for as much as 80% less these days while the iPad hasn't budged is telling.

One day I hope that Bezos quotes me for saying flattering things. I would argue that 95% of what I have written about Amazon over the years is positive. Until then, for a brief splinter of time, at least I was noticed by one of the true visionaries of tech.
Posted by Fan at 3:39 PM